The Deerfield River Fly Fishing Report for 9/3/2020: Guided Deerfield River Float Trips will be the norm from here on out as the fabulous fishing we had on the Swift this summer has slowed down considerably as the Deerfield is starting to show signs of improvement from the doldrums of August. Big dries with droppers attached are still in play as is indicator fishing. I tend to go a little smaller with the nymph selection right now, particularly as caddis pupa and baetis nymphs will be common in the drift. Fish have been up occasionally in the afternoon sipping emergers of both species in the film and scum lines. I expect some good dry fly action to be just around the corner. Be on the lookout for flying ants in September and have both black and cinnamon from 16-20. Tan caddis 16-20 and olive caddis 14-16 will be making appearances as will some cahills (14). The streamer fishing should be in full swing by months end as our wild browns will be on a pre-spawn feeding binge. There are still big fish being taken after dark as you can see from the picture below- this is my personal best from the Deerfield at 34 inches and 18.3 lbs. My hope is that one of my clients gets one bigger! Will it be you? October is filling up so I’d start contemplating dates sooner than later, as always I’ll do my best to accomodate! 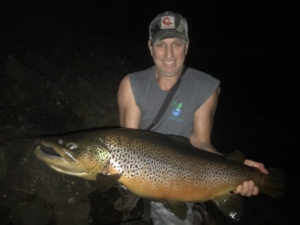